Stopsmoking.ch is the Swiss platform for quitting smoking.

Switzerland ranks a miserable second to last in the world

Discover our series of articles

On the way to a tobacco- and nicotine-free Switzerland

The Swiss Association for Tobacco Control is the center of competence for tobacco prevention in Switzerland. As an umbrella organization for the promotion of non-smoking, it today comprises over 50 organizational members. AT Switzerland offers its members a broad network of experts and provides expertise on tobacco control and prevention. With evidence-based offers and the networking of the central actors, it is committed to a sustainably healthy and smoke-free Switzerland and at the same time offers the population a hand in quitting smoking and nicotine withdrawal.

An important field of action is the denormalization of the consumption of tobacco and nicotine products. This is because a large part of the population still regards the consumption of lethal tobacco and nicotine products as "normal". Furthermore, the protection of young people is at the center of its work and AT Switzerland would like to encourage smokers on their way to quitting smoking. Finally, AT Switzerland is very concerned to strengthen the protection of the population from passive smoke.

French-speaking cantons ban the sale of electronic cigarettes to minors

The canton of Jura recently introduced this measure and the Vaud government has come out in favour of banning the sale of disposable electronic cigarettes, known as "puff bars", to minors. Such a provision already exists in many other French-speaking cantons. At the national level, we still have to wait for the new Tobacco Products Act (TPA) to enter into force, unfortunately! 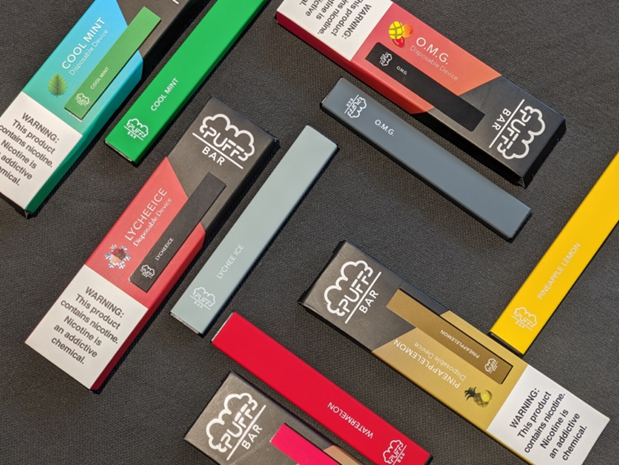 The canton of Vaud wants to protect minors against the harmful effects of disposable electronic cigarettes (puff bars). It will submit to the Grand Council a modification of three laws, so that the legal framework is the same for them as for traditional cigarettes and tobacco. Currently, electronic cigarettes, puff bars, and other related products, with or without nicotine, are still covered by the law on foodstuffs in the canton of Vaud.

Vaud remains the only French-speaking canton not to have yet adopted a law on this subject. After the canton of Jura, which modified the corresponding ordinance in December, it is now Vaud’s turn to ban the sale of electronic cigarettes and their disposable versions, particularly popular with young people, to minors.

In particular, the government proposes:

In addition, the Regulation on the Application of Compulsory Education (RLEO) has been modified by 1 January 2023: students are prohibited from consuming or possessing tobacco, nicotine, or similar products (during class hours).

No national solution before 2024

In cantons where electronic cigarettes, puff bars, and related products are not subject to “tobacco products” legislation, minors have easy access to these highly addictive and harmful products. Moreover, young people are at risk of later switching to traditional cigarettes after having smoked puff bars. So far, only 10 Swiss cantons have introduced a ban on the sale of puff bars to minors, five of which are in French-speaking Switzerland. At the national level, such a ban will only be put in place with the entry into force of the Tobacco Products Act (TPA) And this will probably not happen before 2024. Given the spectacular increase in sales of these products – AT Switzerland expected a massive increase of 2,200% in 2022 – the situation remains problematic and worrying.

Electronic cigarettes or e-cigarettes have become popular because they are promoted as a "healthier alternative" to smoking. This hypothesis was recently refuted by the FDA.

SDG 16 - Strong institutions for a just and inclusive society

The UN's Sustainable Development Goal 16 aims to promote peaceful, inclusive, and just societies, underpinned by effective and accountable institutions. However, by acting to defend its interests, the tobacco industry jeopardises the achievement of these objectives.

A recently launched European Citizens' Initiative aims to create a tobacco-free environment and Europe’s first tobacco-free generation by 2030. To do this, one million signatures must be collected between 16 January 2023 and 16 January 2024. AT Suisse supports the goal of this project and calls on EU citizens living in Switzerland to sign it.

The 17 Sustainable Development Goals and Tobacco