The age at which one begins to smoke is clearly a determining factor in the evolution of smoking behaviour, both at an individual level and from an epidemiological point of view. On the one hand, starting to smoke at an early age is generally correlated with higher levels of nicotine addiction and a greater propensity to continue smoking as an adult[1] (on this subject, see also the section Health Risks Amongst Youth on our page Youth and Smoking). On the other hand, the tobacco industry’s massive effort and investment in marketing and publicity targeting young people in particular – minors and young adults – are the main lever the industry uses to recruit new smokers (in particular to replace smokers who succeed in quitting or who die).

According to this same study, more than one young person in six – 17.2% - age 18 to 19 years old reported having smoked daily before the age of 18, or in other words more than one young person out of two at this age who were already smoking (Kuendig et al., 2017[3]). Out of the total population age 15 and up, the proportion of those who started smoking daily before age 18 was 16.8% (Figure A1A-7). 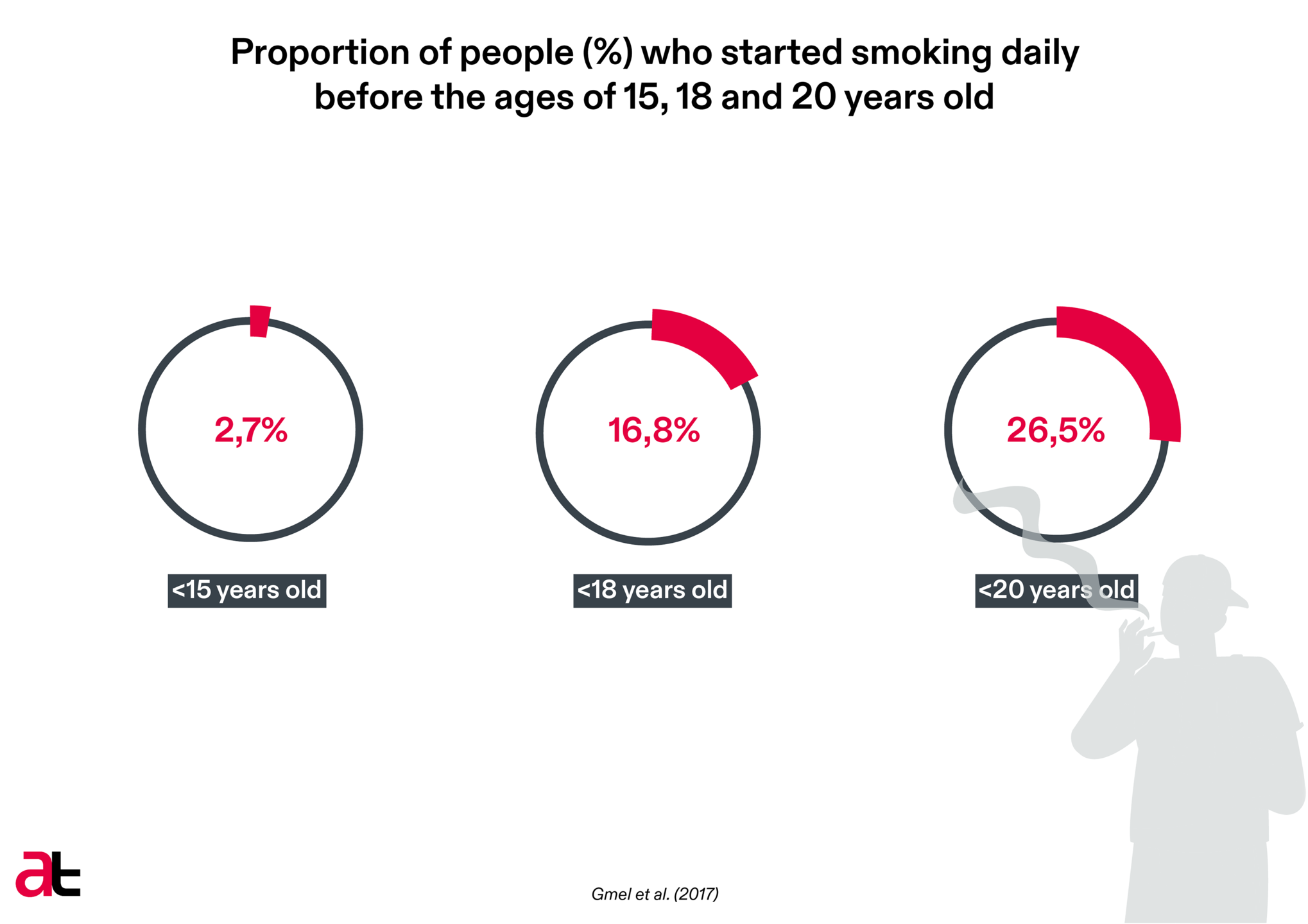 The Monitorage suisse des addictions also documents, in its most recent annual report (data from 2016) the average age of beginning daily smoking. Calculated based on responses from people smoking daily or having smoked daily in the past, the average age of beginning daily use was estimated at 15.0 years for the 15-17 age group, 16.0 years for the 18-19-year-olds, and 16.7 and 17.0 years old respectively for the 20-24 and 25-29-year-old age groups (Gmel et al., 20174).

The Swiss health survey also produced data concerning the age of beginning regular smoking, by both daily and occasional smokers, from in-depth analyses of data collected between 1992 and 2012. During this period, an overall tendency toward an earlier start of regular smoking was observed for most of the age groups studied ( Source www.suchtmonitoring.ch[5]).

Finally, it should also be noted that the data regarding the age of beginning smoking for the youngest age groups was available in the past from the HBSC[6] and ESPAD[7] studies. Even if these data are no longer available due to the discontinuation of the ESPAD study in Switzerland and the exclusion of questions about the age of first use in the HBSC, it can be mentioned that in 2007, according to the ESPAD, the average age of first use of cigarettes by 15-yea-old boys who were already smoking at the time of the study was 12.4 years (Source https://www.suchtmonitoring.ch[8]). It was 13.0 years for girls of the same age.