Smoking causes a whole range of costs to society. In economic terms, these costs are defined as negative externalities. In the tobacco industry, the social costs arising from the consumption of addictive, harmful products can be divided into different types. In addition to the most commonly considered direct health costs, there are social, economic and environmental costs. They are much more difficult to assess, but nevertheless very real and significant.

Deaths and years of life lost

In 2015, a total of 9,535 people (3,461 women and 6,074 men) died from tobacco consumption in Switzerland. This corresponds to 14.1% of all deaths in the reporting year. With 2,708 deaths, lung cancer is the leading cause. Other common causes of death include narrowing of the coronary arteries, lung and respiratory diseases or chronic obstructive pulmonary disease (COPD) as well as other cancers and heart diseases. Before they die – due to direct consequences of tobacco consumption (e.g. lung cancer) or other causes – smokers often require long-term and very cost-intensive medical care.

The healthy life years lost due to illness are also taken into account in the cost estimation. For this purpose, the corresponding DALYs ("disability-adjusted life years" / lost healthy life years) are determined. Calculated on the basis of all illnesses, it is estimated that more than 2 million DALYs were lost in Switzerland in 2015. Of this total number, 208,999 DALYs – i.e. 10.2% of all DALYs in total – were attributable to smoking. The costs resulting from these lost years of life, loss of quality of life or productivity are sometimes difficult to quantify in purely economic or financial terms, which leads to proven underestimations (see underestimated social costs below).

Smoking led to direct medical costs (medical treatments, medication, hospitalisations, etc.) of CHF 3 billion in 2015; this corresponds to CHF 363 per capita. Health insurance costs amounted to CHF 77.6 billion in the year under review, i.e. these CHF 3 billion direct costs account for 3.9% of total health expenditure. In conjunction with the optimisation and development of numerous oncological therapies – including immunotherapy – the costs of certain tobacco-related treatments have risen sharply in recent years. As a result, tobacco-related medical costs are likely to increase in the coming years.

In the following, the study looks at the production losses from tobacco-related absenteeism. Temporary or permanent absenteeism of employees generates costs or additional losses for the economy (e.g. replacement costs, recruitment costs, training costs, etc. to compensate for absenteeism). Smoking led to production losses of CHF 2 billion in 2015, or CHF 242 per capita. In this context, it is important to note that the calculation method used in Mattli's study takes human capital into account and thus adds the costs of absenteeism (sick days) to early retirement or deaths.

However, the above cost breakdown is not sufficient to determine all economic costs resulting from tobacco consumption. A British study was also able to show that tobacco consumption has a significant negative impact on individual incomes and employment prospects. In the United Kingdom, tobacco-related unemployment and reduced incomes lead to income losses in the order of GBP 14.1 billion. Smokers are 5% more likely to be unemployed than non-smokers, and long-term smokers are as much as 7.5% more likely to be unemployed. Smoking cessation, however, proves to be positive; estimates show that this probability drops to 2.5%. The same analysis concludes that non-smokers earn on average 6.8% more than smokers, but to this income difference should be added the money spent to purchase the tobacco products consumed. Apart from these figures, tobacco use can also lead to tragic personal life situations, as people can lose their jobs or professions due to tobacco-related diseases.[ii]

In addition to direct medical costs, there are also social costs at the collective level that have not been included in the above estimates. A recent report on these costs in the UK found that smokers are 2.5 times more likely to need social care support than people who have never smoked. Ex-smokers are 1.5 times more likely to seek social care support. On average, smokers encounter difficulties in the implementation of tasks 7 years earlier than those who have never smoked and make use of support 10 years earlier. Smokers and ex-smokers also receive more hours of paid help (18 hours/week) than people who have never smoked (5 hours/week), i.e. 3.6 times more.[iii]

In Switzerland, for example, no figures are available on the ratio of smokers and ex-smokers who receive disability insurance or on the tobacco-related social costs assumed by cantons or other social welfare agencies in connection with tobacco consumption. 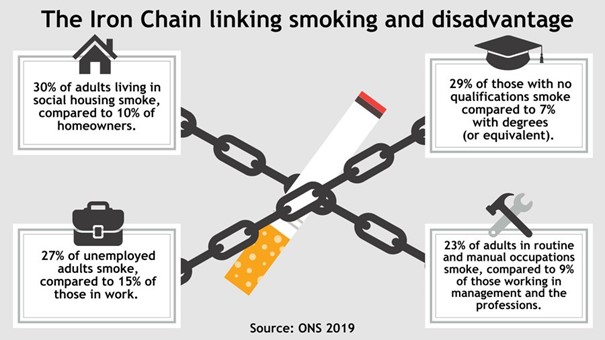 Costs of tobacco use compared to other addictions: 50% of total costs!

A new study published in 2020 takes into account the costs arising from various addictions in Switzerland. Its cost estimates are lower than those determined by Mattli in connection with smoking (albeit with different calculation approaches), but it underscores the finding that more than half of the costs arising from addictive behaviour are attributable to smoking.[v]

According to this study, addictive behaviour in Switzerland led to estimated economic costs of CHF 7.7 billion in 2017. This estimate was determined using the friction cost method (in contrast to the human capital approach used by Mattli). If the production losses were calculated using the human capital approach, the result would be half as expensive (i.e. CHF 11.5 billion). Most of the CHF 7.7 billion is attributable to smoking (3.9 billion), followed by alcohol (almost 2.8 billion) and drugs (0.9 billion). The costs arising from gambling addiction amount to an additional CHF 61 million; however, they could only be partially determined. Other addictions were not taken into account due to a lack of corresponding data.

The relative importance of the costs arising from certain addictions also poses special challenges for our health policymakers.[vi] It should be noted that environmental costs have not been considered in this context, especially since no other addiction generates environmental costs comparable to smoking.

No Swiss study takes into account the negative environmental impact of tobacco production and consumption. However, the production cycle of tobacco is tantamount to an environmental disaster, and it is very likely that it is precisely the industrial processing method that has the strongest negative impact on the environment – especially given the known negative effects of the end product in our country. In a report published in 2017 by the World Health Organization (WHO) on the environmental impact of the tobacco industry, the authors concluded that smoking is a major problem for sustainable global development. Indeed, the report concludes that smoking is not simply a threat to health, but a threat to human development as a whole.[vii]

Much of the environmentally damaging consequences of tobacco cultivation can be seen in the growing countries (e.g. Africa or Brazil) in the form of deforestation, intensive use of pesticides and fungicides, and enormous consumption of water and other resources, but other negative consequences also have an impact on our environment.

Most of the time, cigarette butts are simply thrown on the ground, where they form the most common waste to be disposed of during cleaning campaigns. In the end, this waste is mostly found in our waters, streams, rivers and lakes. Another part of the waste – including the environmentally harmful waste of new products (e-cigarettes, etc.) – ends up in our processing plants. This involves plastic parts (e.g. cigarette filters), heavy metals and vast quantities of harmful chemical substances that have to be processed, filtered or incinerated. The question therefore arises as to how this type of waste should be included in the cost calculations. A next study to evaluate the costs incurred in connection with tobacco consumption in Switzerland would also have to deal with this aspect.

For the coming years, everything points to an increase in the economic and social costs of tobacco consumption. On the one hand, the prevalence of smoking does not appear to be declining and projections point to a growing proportion of women smokers among women (23% in 2017), approaching that of men (31% in 2017). Provided that smoking rates remain stagnant in the coming years, demographic growth and population ageing will ensure that the number of deaths will increase from 9,535/year in 2015 to over 13,000/year in 2050. Between 2008 and 2020, the population of our country grew by 1 million to 8.5 million. At the same prevalence of smokers, this means in absolute numbers an increase of about 200,000 people who smoke. The latest figures on cigarette sales in Switzerland in 2020 show an increase of 4%, after years of falling figures. These figures make us think!

The prices of medicines are trending steadily upwards, especially in connection with certain therapies for the treatment of tobacco-related cancers. And other costs related to labour, social or environmental are also unlikely to move downwards in the medium to long term from today's perspective. 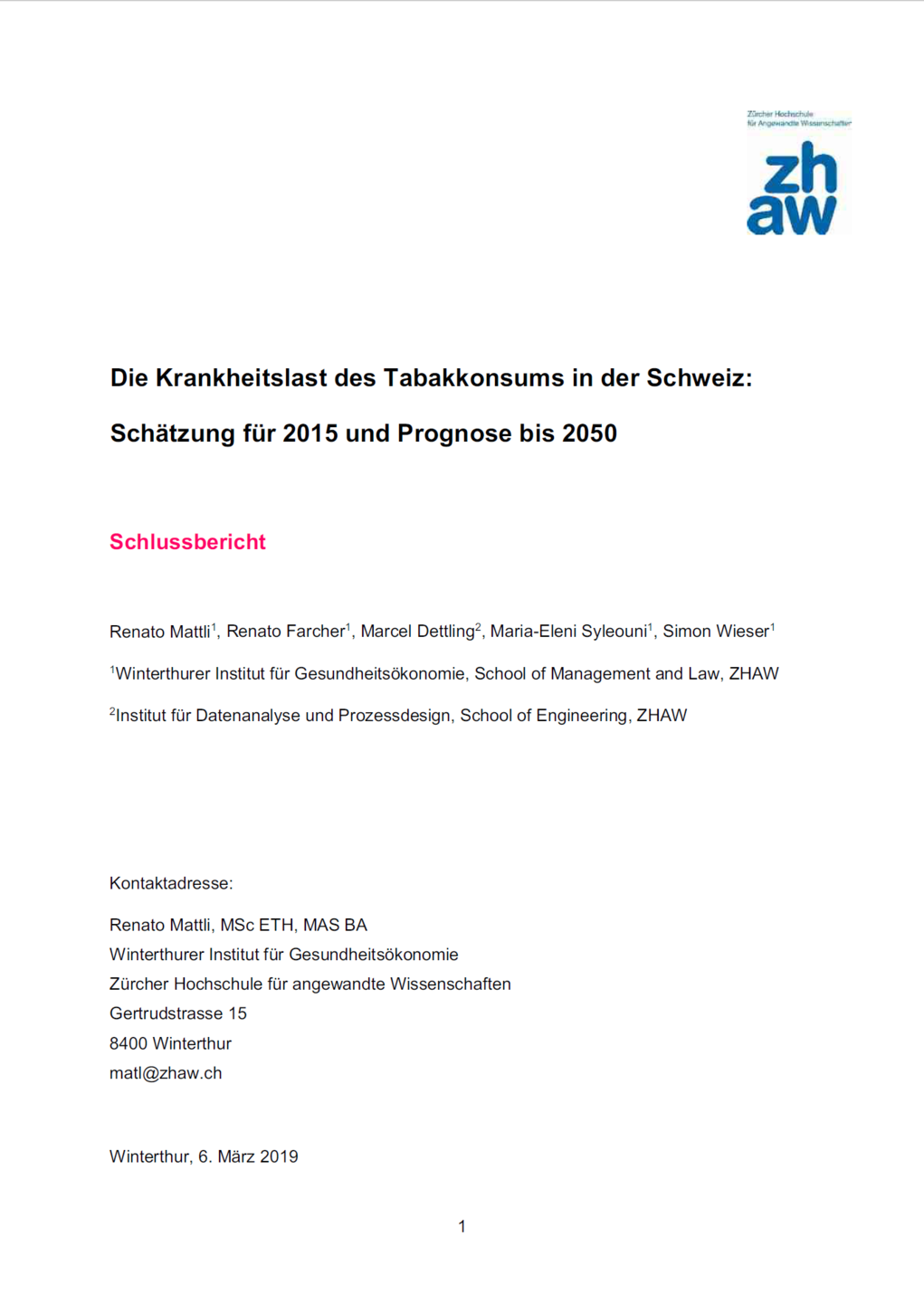