Switzerland ranks a miserable second to last in the world

Stopsmoking.ch is the Swiss platform for quitting smoking.

In the Clutches of the Tobacco Companies

In cooperation with Medicus Mundi Switzerland (MMS), AT Switzerland addresses in an online bulletin the crimes of the tobacco industry in the global South

Discover our series of articles

On the way to a tobacco- and nicotine-free Switzerland

The Swiss Association for Tobacco Control is the center of competence for tobacco prevention in Switzerland. As an umbrella organization for the promotion of non-smoking, it today comprises over 50 organizational members. AT Switzerland offers its members a broad network of experts and provides expertise on tobacco control and prevention. With evidence-based offers and the networking of the central actors, it is committed to a sustainably healthy and smoke-free Switzerland and at the same time offers the population a hand in quitting smoking and nicotine withdrawal.

An important field of action is the denormalization of the consumption of tobacco and nicotine products. This is because a large part of the population still regards the consumption of lethal tobacco and nicotine products as "normal". Furthermore, the protection of young people is at the center of its work and AT Switzerland would like to encourage smokers on their way to quitting smoking. Finally, AT Switzerland is very concerned to strengthen the protection of the population from passive smoke.

A new study led by the Lawrence Berkeley National Laboratory shows that chemicals lingering in indoor spaces where smoking took place can put whole households at risk. Researchers found that the concentrations of toxic chemicals that linger indoors after cigarettes have been smoked can result in exposure that exceeds health guidelines established by the State of California. 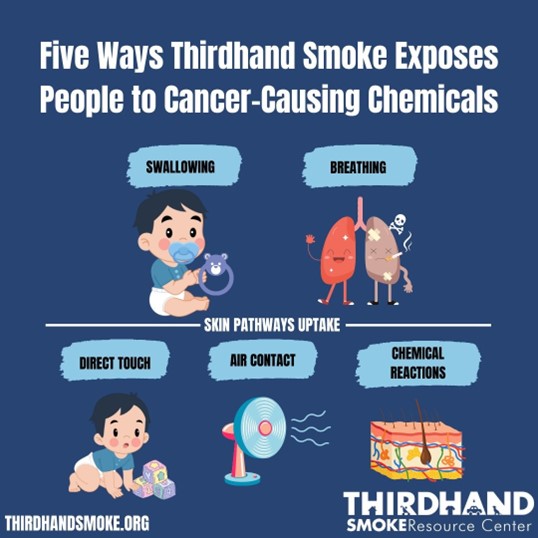 Some smells seem to seep into everything they touch. Tobacco smoke is one of the worst offenders. Thirdhand smoke refers to residual nicotine and other hazardous chemicals that contaminate the indoor environment after smoking. Think of the lingering smell you’ve probably encountered when handling the clothes of a person who smokes a pack a day, or when checking into a tidy but cigarette-friendly hotel room.

Scientists at the U.S. Department of Energy’s Lawrence Berkeley National Laboratory (Berkeley Lab) first identified thirdhand smoke as a potential health hazard a decade ago. Their newest study develops more quantitative insights into its long-term health risks. They found that concentrations of toxic chemicals lingering in indoor environments where cigarettes have been smoked can exceed risk guidelines from the State of California, meaning that non-smokers can be exposed to health risks by living in contaminated spaces.

The study was published in the journal Environmental Science & Technology. Alongside Berkeley Lab scientists, co-authors on this work include collaborators from UC San Francisco, UC Riverside, and San Diego State University. These teams are members of the California Consortium on Thirdhand Smoke, funded by the Tobacco-Related Disease Research Program, which is managed by the University of California.

“Since we first described this chemistry in 2010, several studies have further illustrated the presence of TSNAs on indoor surfaces and settled dust. In this new article, we integrated the new information produced over the past decade with our most recent results, to estimate the daily doses to which people may be exposed when living in homes contaminated with thirdhand smoke,” said Berkeley Lab chemist Hugo Destaillats, the study’s principal investigator.

TSNAs enter the body through multiple pathways. The study estimated doses through inhalation and dust ingestion using TSNA indoor concentrations measured by Consortium investigators and other authors. In addition, the team focused on dermal exposures, which are more difficult to measure, and for which there is much less information. These dermal exposures can happen directly through skin contact with polluted air or a contaminated surface harboring TSNAs – for example, while sleeping on smoky bed sheets. But they can also take place via epidermal chemistry, when nicotine already settled on the skin reacts with environmental HONO to form TSNAs right on the body’s surface.

“Nicotine is released in large amounts during smoking, and it coats all indoor surfaces, including human skin,” said Xiaochen Tang, who led Berkeley Lab’s experimental efforts in the Indoor Environment Group. “We found that the presence of skin oils and sweat on model surfaces led to a higher yield of TSNAs in the presence of HONO, compared with clean surfaces.”

Three different TSNAs were formed in this reaction, two of which (identified by the acronyms NNK and NNN) are known carcinogens. There is less toxicological information for the third one, NNA, which is not present in tobacco smoke. For that reason, the study included an in vitro assessment.

“We present additional evidence of the genotoxicity of NNA by evaluating its effect on cultured human lung cells,” said Bo Hang, a co-author from Berkeley Lab’s Biosciences Area. “Contact with NNA led to DNA damage, including double-strand breaks, the most deleterious genotoxic outcome.”

To better understand dermal exposures, Consortium researchers at UC Riverside and UC San Francisco evaluated how NNK and nicotine penetrate through the skin of mice. Co-author Manuela Martins-Green, of UC Riverside, pointed out that “under the experimental conditions used, the analysis of the metabolites in the mouse urine showed that, for both compounds, direct dermal contact resulted in the accumulation and circulation in the body for seven days after dermal exposure was discontinued.”

The study found that exposure through all of these pathways – inhalation, dust ingestion, and dermal absorption – under typical indoor conditions can result in NNK doses that exceed health guidelines known as “No-Significant Risk Levels” established by California’s Office of Environmental Health Hazard Assessment as part of Proposition 65. These cumulative exposures can contribute to an elevated cancer risk. Dermal exposure routes contribute significantly to TSNA intake at levels that can be comparable to or even higher than inhalation.

“These findings illustrate the potential health impacts of thirdhand smoke, which contains not only TSNAs but hundreds of other chemicals, some of which are also known carcinogens,” said co-author Neal Benowitz, a UCSF professor who leads the Consortium. “Next steps for this research will explore in more detail the mechanisms of adverse health effects associated with tobacco and cannabis residues, effective remediation strategies, and translation of scientific findings to tobacco control practice.”

AT Blog - Explosion in the Consumption of Disposable Electronic Cigarettes

Since their arrival, disposable electronic cigarettes have been completely changing the nicotine consumption market and their sales are growing exponentially: the increase in sales could reach 2,200% in 2022! The consumption of these products by young people continues to spread massively in an invisible and dangerous way. Not only is our legal framework completely behind the times, but our public health policies are totally inadequate to deal with these very rapid developments.

Cities must be inclusive, safe, resilient and sustainable; this is the goal of the eleventh Sustainable Development Objective of the United Nations. However, smoking imperils the realisation of this goal on several fronts.

A new study by Faselis et al. (2022), has highlighted the unmet need in lung cancer screening, as their research has shown that a 10-fold high lung cancer risk has been found among light and former heavy smokers for whom computer tomography (CT) scan screening is not recommended.[i]

The 17 Sustainable Development Goals and Tobacco