Switzerland: the Home of the Tobacco Companies

Switzerland, "the home of the tobacco companies", plummets to second-last place in the European "Tobacco Control Scale 2019" (35 out of 36) and loses touch with contemporary tobacco and nicotine prevention. The United Kingdom is in first place in the ranking.

Once again, Switzerland has fallen behind in the European comparison of tobacco control measures. It is the result of a decade of stagnation in Swiss tobacco prevention policy: in 2016, Switzerland still ranked 21st and in 2013 18th. Switzerland again receives particularly poor marks for tobacco advertising restrictions: No other country in the rating scores so poorly in this category.

For the fifth time in a row since 2007, the United Kingdom takes first place and Ireland a place in the top three of the ranking. The successes of the two countries make one sit up and take notice: In the United Kingdom, the proportion of adult smokers has decreased by five percent since 2011. It was still at 15 percent in 2018. In Ireland, the proportion of smokers fell by six percent between 2015 and 2019, from 23 to 17 percent. By comparison, 27 percent of people in Switzerland smoke, and among adolescents and young adults the figure is as high as 32 percent. A value that has levelled off at a high level since 2007. 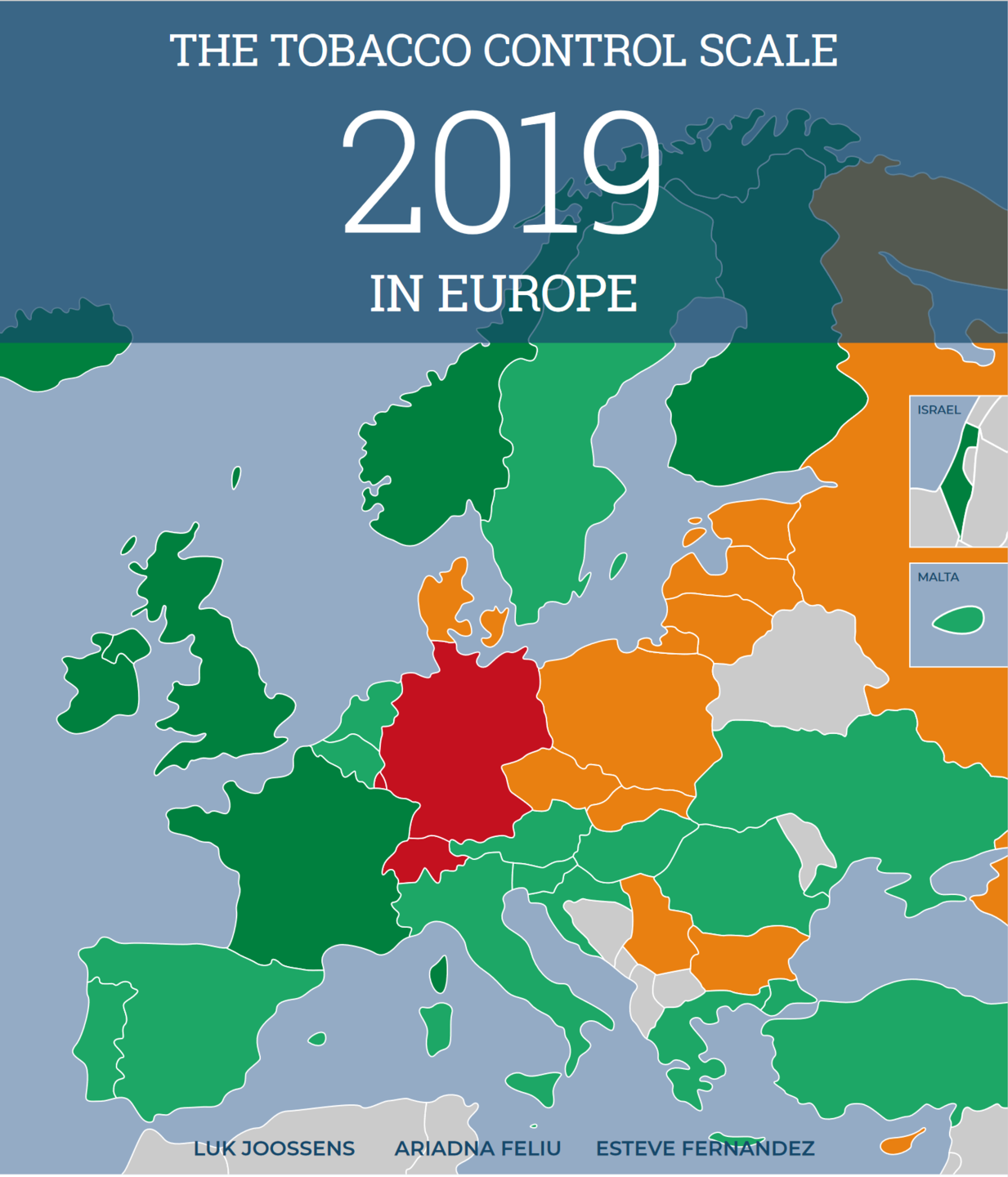 In contrast to Switzerland, most European countries are consistently improving their tobacco control measures. In 2014, the European Union adopted new standards that in many areas go far beyond the measures in Switzerland: For example, from 20 May 2020, the sale of flavoured tobacco will be banned in all states of the European Union. This is particularly appealing to young people. The EU-wide ban on substances that facilitate inhalation (and thus promote nicotine addiction) already came into force in 2016. In Switzerland, the tobacco lobby successfully resisted corresponding proposals. Furthermore, 8 countries[i] in Europe have already introduced neutral cigarette packs (plain packaging) since 2017 or are currently implementing this measure. A very effective measure, which the tobacco lobby is fighting with all means.

In 2016, the National Council and the Council of States rejected an initial moderate proposal for a Tobacco Products Act. In the Tobacco Products Act passed in October 2021, the Parliament in many cases insists on the status quo or favours only timid improvements in the protection of children and young people, which are already outdated in most countries in Europe.

Switzerland has not yet ratified the International Framework Convention on Tobacco Control (FCTC) of the World Health Organization (WHO) of 2004, which defines common minimum legal standards. In Europe, apart from Switzerland, only Andorra, Liechtenstein and Monaco have not done so either. Surveys from recent years show, however, that a majority of the Swiss population would clearly support a ban on advertising tobacco products and higher tobacco taxes [ii].

Sales price blocked as a means of prevention

High tobacco taxes are the most effective means of reducing the consumption of tobacco and nicotine products, especially among young people. This protective mechanism has been blocked by parliament under pressure from the tobacco lobby: since 2013, the Federal Council no longer has the authority to increase tobacco taxes. All creeping price increases since then have come from the side of the producers. In Europe, on the other hand, the states use tobacco tax as an instrument of health policy. Half of all EU states now levy a tobacco tax of 75 per cent or more on a pack of cigarettes. The high price level in Switzerland, compared to the EU, hides this fact. In our neighbouring country France, a pack of cigarettes will cost an average of 10 euros from November 2020.